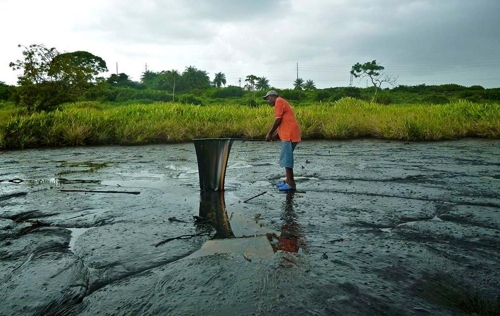 In this article from the Nikan west company the gilsonite producer in Iran, we want to introduce you to the facts about Natural Bitumen Lake.

what is the Natural Bitumen ?

Bitumen Lake should be considered as one of the strange wonders of nature. Imagine a lake filled with black matter called bitumen instead of water. Bitumen lakes are scattered in limited countries in the world; and for this reason it seems strange and unknown for many people.

But the fact is that these lakes exist and the material in them is exactly bitumen or asphalt; Due to being produced in natural conditions without human intervention, a “Natural” suffix has been added to their name.

Bitumen is a type of Gilsonite , which is present in almost liquid form. However, synthetic bitumen or refinery bitumen is commonly used to make asphalt for streets and roads, as well as to cover insulation in various places, including roofs and pipe crossings in various industries; But bitumen has the same application and adds even more positive properties to the final product; And for this reason, they use it as a supplement to increase the productive features of the final product.

What is a Natural Bitumen Lake?

Simply put, this lake should be considered a kind of mine whose desired material has reached the surface. In fact, natural bitumen or asphalt is produced in the subsoil for thousands of years.

Sometimes these materials can be obtained by digging a mine, in which case they are usually solid and are called Gilsonite. Sometimes they manifest themselves in the form of pits or lakes filled with liquid bitumen or natural asphalt due to penetration into the upper levels of the earth’s crust.

First of all, it is interesting to know that this natural substance, although in most cases, reaches the surface in the form of a lake; but this is not the only expression. Bitumen can also reach the earth’s surface during volcanic eruptions. Of course, such eruptions are very rare, and the last one happened back in 2003.

Natural asphalt also sometimes appears as a mixture in the sand and in the form of sediment on the ground. One well-known example is the bituminous sands of northeastern Alberta, Canada. This area can be considered the largest area with surface bituminous sands in the world.

where is the largest natural bitumen lake ?

Also the largest natural bitumen lake is located in southwestern Trinidad. This lake with an area of ​​40 hectares and a maximum depth of 75 meters, occupies a large area. The bitumen in this lake is very thick, in a way that can be moved on the surface of most parts of the lake. Of course, this does not mean complete security.

Because if it does not move, it will eventually catch and swallow its host lake. For this reason, with a closer look at the surface of the lake, you will notice the presence of slow movements on the surface of the bitumen in it. Parts of the lake are also more liquid, which can even be submerged like water.

Natural Bitumen Lake is formed due to various natural phenomena. One of these phenomena is called seduction. The movement of the earth’s plates on top of each other has caused faults that pave the way for exiting crude oil along with sand, etc. to the earth’s surface. Material that reaches the surface, under the influence of years of evaporation, becomes natural bitumen.

The lake described and active in Trinidad is called “La Berry” and was discovered in 1595. About 10 million tons of bitumen were extracted from the lake by 1867, and it is still estimated that there are about 6 million tons of this substance in the lake.

Today, of course, the lake has more tourist attractions than industrial functions, and thousands of people visit it every year.